How Did Doors Open Before Hinges Were Invented

What Was Used Before Door Hinges?

One of the biggest problems we have with this question is that it assumes door hinges are a modern invention when they aren’t. Door hinges have been around for a while, and by that, we mean a few thousand years. In fact, the history of the door hinge stretches into antiquity, but even then, many aren’t sure how far back it stretches. That’s why it is so hard to put an exact date on its invention. Also, it wasn’t one person’s invention but rather the product of evolution.

The metal hinges date back to around 5500 years, and there is quite a bit of evidence to suggest that wood and stone were used to make them. Also, some Mesopotamian cultures have been producing hinges prior to the Bronze Age. The devices were refined over the centuries with varying designs.

Hinges were being used in ancient societies across Europe, Africa, and Asia, amongst other places. However, many, if not all, early hinges were made from bronze. In fact, all you need to do is look back at some of the Hittite and Akkadian structures; many of these often massive palaces, with large protective gates and numerous sacred structures, had hinges. Also, these weren’t your run-of-the-mill type hinges; they had to often hold up a several-ton door that operated via load-bearing hinges.

It is important to mention here that these ancient door hinges were limited to only the super-rich, like those of the royal family and their royal structures. The significant reason being that metal was expensive, and fabrication was highly labor-intensive. That’s why these ancient hinges were only something that emperors who wanted to show their power could invest in. Normal or regular people didn’t have hinges on their doors, and some homes even had no doors.

People who had doors would often secure it with a series of straps. The straps and buckles used looked a lot like the belts we wear today, only that they were larger and thicker. While many historians may argue that if belts were used, there is evidence suggesting that leather belts were a mechanism used by homes that had doors.

A little later, as we’ll go into this article, the hinge had to evolve from something that was only meant to be used in royal palaces to what we have today.

Hinges were Used for Jewelry Too

Contrary to what many people think, hinges during ancient times were even produced at a miniature scale. While they weren’t used in everyday objects, gold jewelry, for instance, wasn’t considered “everyday objects” either. That’s why the rich and often extensively powerful would commission a team of blacksmiths to craft some of the finest, tiny hinges to use as clasps for their jewelry.

As knowledge of metals and metallurgy started improving, cultures around the world, at least, for the most part, switched to creating steel and brass. That led to an inevitable reduction in hinges, which meant that it could be used in regular homes if needed.

Hinges Used During the Middle Ages 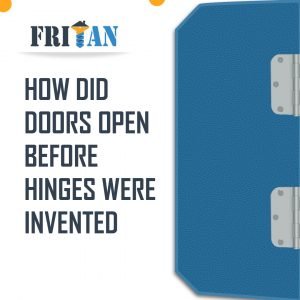 What was used before door hinges were invented?

Metalwork had slightly advanced during the Medieval period, which meant that more regular people started to enjoy the benefits of having a door with hinges in their homes. However, it was mostly up to the local blacksmiths to create these often wrought iron hinges, in addition to the wrought iron tools need to install them, but at obviously affordable rates.

The difference between the hinges of a local butcher’s home and those on the large doors on the royal palace or castle was that these were larger, stronger, and more expensive. Many of those old large hinges are still visible in castles around Europe, often paired with large oak doors. The hinges would stretch across the entire door’s face. Some historians believe these large hinges served both a decorative and functional purpose. Also, these unmistakably large door hinges would work as reinforcement for the doors.

The classic example of this is the drawbridge. There are two essential features of the classic drawbridge, the first being that it had to support heavy loads when it was lowered and then be sturdy enough to withstand a breach if there was an invasion. Often that would mean using tougher lumber coupled with wrought iron hinges. Also, if the drawbridge could not repel enemies, there were other weapons using hinges available to pad the castle’s defenses. A trebuchet, for instance, which is a type of siege engine, was capable of propelling a missile at high velocities, reportedly with the power to crush through stone walls and was used to deposit diseased bodies into enemy camps. The Persians are credited with developing a hinged version of the trebuchet, which was regarded as being one of the most deadly and highly accurate. A hinged pushing or pulling mechanism helped the bowman easily cock the crossbow. Not only was it easier, but it also decreased loading time.

Aside from the many military applications, there were many types of door and butt hinges used in jewelry, chests, shipbuilding, gates, and further technological development through the Renaissance and Age of Enlightenment, which helped ensure that future hinges were a lot smaller, lighter and better made.

During the Victorian Era, door hinges were comparatively more common, mainly because steam power and the age of industrialization meant that they were produced at scale. The hinge was in the middle of a manufacturing boom. The numerous mechanical advances over a short time meant there just about every machine needed hinge parts. There was a need to manufacture complex hinges even faster but at a fraction of what they previously cost. So, new methods and machines had to be invented to achieve that.

It was during the 19th century that we experienced most of the innovations to hinge design and manufacturing. The popular hinges using ball bearings to ensure smoother operation and those with neat finishes were often also more expensive. But that also meant that numerous products with hinges made it to the daily lives of regular people. In fact, if we could list their uses back then, it would cover several pages. Suffice to say, though, that hinges back then were used for more than just doors. 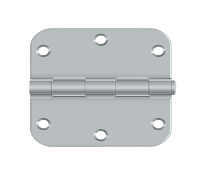 Hinge development didn’t stop; in fact, it hasn’t top just yet either. We’ve seen further developments in hinge technology, but much of it has to do with machine building. On the domestic or everyday side of things, we have hinges that allow doors to move in either direction, while there are hinges with springs that prevent doors from remaining open.

The latest hinges and some of the smallest ones are used to keep new folding smartphones closed and help them open up. In fact, it is estimated that foldable smartphones are the latest frontiers for hinge development. While hinges might be the unsung heroes of foldable smartphones, brands are pouring billions into developing and then manufacturing them at scale.

On the low-tech end of the spectrum, we have decorative and often corrosion-resistant door hinges. The corrosive resistant hinges are used in homes, buildings, and offices near the sea and where salty air can cause them to deteriorate.

Hinges today are used everywhere. In fact, anywhere you look, there is a hinge, which may not look a lot like what you have on the back of the door, but it’s still there. Every industry from aerospace, military, travel, and computing benefits greatly from the invention of the hinge. If you take a closer look at your desk, can you see how many hinges it has? We bet it has more than you’ll want to count!

Door hinges are just a fraction of the types of hinges that we use today. In fact, there are several dozen various categories of hinges that are used across various industries and for various purposes. There are also custom-built hinges meant for a particular type of machine.

As a homeowner who has a few doors, all of which most certainly have hinges, the vital thing to keep in mind is that they shouldn’t be overlooked. A hinge is a major part of your home, but modern hinges aren’t built to last centuries like their ancient ancestors because, like everything else, they have a service life. One of the reasons being they aren’t as large and heavy. That means when you start seeing that the hinges are wearing out, it’s time to replace them. Fortunately, replacing door hinges is easier than it was several centuries ago; with the right tools and an extra set of hands, almost anyone can do it.

Fritan Technology, LLC is a product development and engineering firm that specializes in the design of products for the home repair, renovation, and decoration industries.